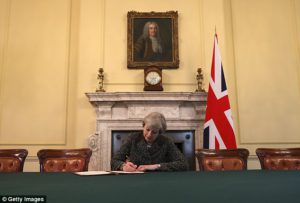 This soundbite from our Prime Minister, Theresa May, might well go down in history as the quote of the Brexit. The letter to the EU was finally sent on Wednesday of this week, triggering Article 50 and starting the ball rolling which will result in the UK’s withdrawal from the European Union.

According to the EU referendum poll, around 51.5% of those reading this blog voted to stay in Europe, the rest voting to leave. Nationally, though, those statistics were almost exactly reversed which is why Article 50 has been triggered this week.

So, what does the future hold? What will be negotiated, or renegotiated? What will be the nature of our country’s relationship with the rest of Europe? We still don’t really know. There is still a lot of speculation, guesswork and breath-holding as we wait to see the reactions of the other twenty-seven member states. Perhaps all we can really say for sure is that ‘this is a historic moment from which there is no turning back’.

As we approach Easter, we lift our gaze from the political climate of our generation, serious though it may be, and re-orientate ourselves around the cosmic, history -defining event of the world; a historic event from which there is no turning back. We prepare once again to celebrate, marvel and commemorate how the Lord of all creation gave Himself for our rebellious and broken world.

In a staggering and historic moment on a Roman Cross, God shows his plan for the world as well as the extent of His self-giving love. Then, from an empty tomb, God ushers in a new age – His age – where Death is dealt a fatal blow and Sin is served notice. In short, a historic moment from which there is no turning back.

Our 24-hour news outlets, newspapers, twitter feeds and the like might be full of Article 50 and Brexit. It is true, we are witnessing unprecedented events, but we remember that Brexit or any other political fall-out will never have the last word. We’ve had a peep at the last page, and we know how it ends, and what was started at Calvary will one day be fully realized when the Risen One wraps up history as we know it and His Kingdom will fully come. Now, that will be a historic moment from which there is no turning back.